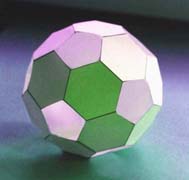 The photograph shows a copy of the paper model of C60 made by R.W.Henson at AERE Harwell in 1970 "In Science the credit goes to the man who convinces the world, not to the man to whom the idea first occurs."
Sir Francis Darwin. Carbon 60 or 'Buckminsterfullerene' is a closed structure composed of 60 carbon atoms arranged in the form of a hollow ball. Twenty carbon hexagons are linked and bent into the shape of a sphere by the inclusion of twelve equally-spaced pentagonal 'holes'. This is sometimes poetically called a 'Buckyball'.

The structure was 'discovered', or proved to exist, by Robert Curl and Richard Smalley of Rice University, together with Sir Harold Kroto of the University of Sussex. This was published in 'Nature' in November 1985 (Nature 318, 162-163 1985), and had a mixed reception.... both criticism and enthusiastic acceptance. Most physicists and chemists had not expected that carbon would be found in another form. During the next few years further evidence was obtained that proved the proposed structure was correct. For this work, Kroto, Curl and Smalley were jointly awarded the 1996 Nobel Prize for Chemistry.

This new form of carbon was named after Richard Buckminster Fuller who was a pioneer in the design of the Geodesic dome often used in large building structures. A prime example of this was the dome for the 1967 Montreal World Exhibition. Fuller patented the geodesic dome in 1954!

However, the first dome with this structure was built at the Carl Zeiss optical works at Jena in Germany in 1922 by
Dr. Walter Bauersfeld. The design of the dome was almost incidental to his even more remarkable technical achievement: the invention of the 'Planetarium Projector'.

The history of this structure is long and varied, but one early and interesting study was by D'Arcy Wentworth Thompson. In his book 'On Growth and Form' (Cambridge University Press 1942) Thompson shows that a hexagonal grid, of any size, can be closed into a polyhedron by the inclusion of twelve pentagons in its network. It is interesting to note that C60 would be the smallest size of such a symmetric net. Thompson's interest was in the study of the skeletons of microscopic sea creatures.

Of course, much of the mathematical background to this subject stems from Euler, and even Euclid. A very sound, and readable, discourse on the subject of Polyhedra may be found in 'Mathematical Recreations & Essays' by W. W. Rouse Ball (Macmillan & Co. 1939 11th edition).

The idea of a hollow carbon cage structure was first proposed by David E. H. Jones writing in the New Scientist under the name of 'Daedalus' (New Sci. 32, 245 1966). He suggested that it may be possible to create giant hollow molecules by distorting a plane hexagonal carbon net by the addition of impurity atoms. This, he claimed, could introduce curvature, and hence close the net into a spherical shell. He did not explain how this might be achieved.
In his book 'The Inventions of Daedalus' (Freeman 1982), Jones expands this idea, and even quotes from the work of Thompson. Anyone who has ever read 'Daedalus' will know that his 'inventions' lie somewhere in the hazy borderline between the feasable, and the fantastic, and as such are not to be taken too seriously. At least not until 1985!

Perhaps the first mention of the C60 molecule in the literature was in an article by E. Osawa (Kagaku 25, 854-863 1970). Osawa predicted that such a molecule would be stable, and expanded this in more detail in a book on aromatic molecules the following year (Z. Yoshida and E. Osawa 'Aromaticity' 1971). Both these articles are in Japanese.

Also in 1970, R. W. Henson , with no prior knowledge of 'Daedalus', nor of Osawa's work, proposed the structure and made a model of Carbon 60. At the time he was a member of the Graphite and Carbon Studies group at AERE Harwell, studying radiation damage in the graphite moderator of nuclear reactors. The evidence for this new form of carbon was very weak and was not accepted, even by his colleagues! It was never published. A recent edition of the 'Carbon' journal contains a belated acknowledgement of Henson's work in an editorial by Dr.P.A.Thrower. Carbon Vol 37 No.11 1677-1678 (1999).

In 1992 the international journal 'Carbon' published a special issue on Fullerenes (Carbon Vol 30 No.8).

An interesting account of the events leading up to the discovery of Carbon 60 can be found in a book by Jim Baggott:
'Perfect Symmetry - The Accidental Discovery of Buckminsterfullerene' (Oxford University Press 1994).

Also of interest: 'The Most Beautiful Molecule: An Adventure in Chemistry' by Hugh Aldersley Williams (Aurum Press 1994).

N.B. Since writing this page I have become aware that more history has emerged on Wikipedia see - Fullerene

It is interesting that the article on Buckminsterfullerene ( C60 ) contains very little history on this subject!

Back to Index Page